The opening speeches at the 23rd Conference of Parties made it clear that the world is coming together despite the shameful exit by one of the biggest players, the United States. The 23 Conference of Parties (COP) is strangely juxtaposed with heavy hitting emotional stories but also the dry formulaic diplomatic talk of negotiations.

One large meeting room in Bonn Germany housed representatives from all of the world’s nations to plan how they would measure the performance of each country in sticking to their commitment to reduce greenhouse gas emissions (a process called the Global Stocktake). This gathering is set within a  series of meetings to determine what the Global Stocktake is going to look like and how nations could keep each other accountable while staying within the rules of the Paris Agreement. Nearing the end of 2 hours of diplomatic speech the official party delegate from Solomon Island conceded that because of the Paris Agreement the results of the Global Stocktake must not be legally punishable. He uncharacteristically rose out of his calm tone and addressed the meeting room with a thundering bravado. In his raised voice he assured the group that when people are drowning in 2023, fingers will be pointed, and people will want justice no matter what the text of the Paris Accord says about not being punishable. He went on to lament that the Global Stocktake is a measure of whether entire countries have a future and a reality check for if we are doing enough. He demanded that his fellow representatives never forget that what the Global Stocktake was for humanity and ensuring that everyone does their fair share.

Although the United States contributed to this meeting about the Global Staketake it was painfully obvious that the U.S. federal government had decided not to do its fair share. 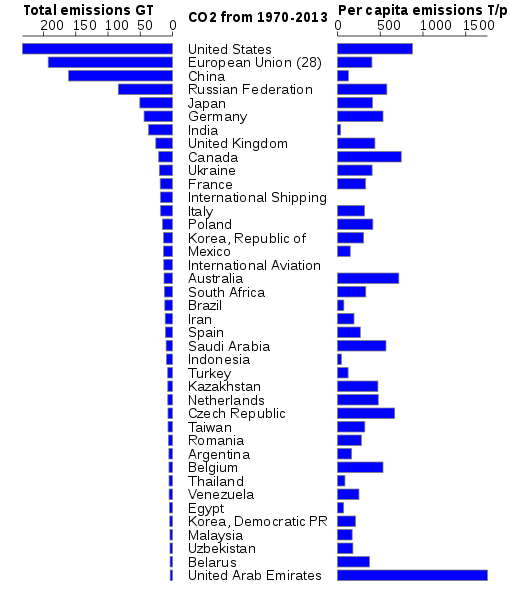 The data comes from the EU EDGAR database, CC-BY-SA-4.0

To me, the tragedy of COP 23 feels as if the United States was a father who walked out on their son. Sadder still, instead of cursing their father, the innocent child stomachs the pain and does everything in their power to get their father to rejoin their dysfunctional family. This is the shameful situation that my conversation with Bruce Kijiner the Secretary of Foreign Affairs of the Marshall Islands further illustrates:

Me: “Do you mind repeating what you shared in the meeting about what the Marshall Islands is doing to increase ambition on fighting Climate Change?”

Secretary Kijiner: “We aim to be climate change leaders. This is our survival, our future, We are one of 4 Atoll nations in the world, so climate change is an existential issue for us. If the world doesn’t do anything now it will mean the demise the Marshall Islands. We don’t want to wait. We want to do what we can.”

Me: “A recent poll shows that  7 out of 10  U.S. voters agree that given the amount of greenhouse gases that it produces the United States should take aggressive action to slow global warming. Is there anything you would like to say to people in the U.S. who are frustrated that their government is not actually taking the action that they want?”

“We miss the U.S. leadership but we continue to think that they have a lot to contribute to take up their role as the leaders to overt the consequences of climate change to small countries like the Marshall Islands.”

“The Marshall Island’s doesn’t have mountains so we don’t have higher grounds to go to. If we [the world] exceed 1.5 degrees Celsius that means our islands will be underwater in the next 50, 60, 70 years, but if we take action now we may still have a place in the world.”

“I think that while the national government may have a differing view, it is the actual people on the ground that can make the real difference. So whatever the federal government may decide, it is actually the people on the ground that may provide the ability for changes including taking actions in the household or in the communities. I wish to register my appreciation to the state of California, New York City, Hawaii and the many other states that are taking action. They are not moving away from the Paris Agreement but in fact, they joined as a subnational actor. For that let me thank them on behalf of my people and my country we appreciate their solidarity and their support.”

Pushing forward to new resolutions for bringing the everyday person’s voice to the table:

At COP 23 the nations of the world are trying to move past the tremendous setback a reckless world leader has created is a battle that they are not entirely losing. There is an incredible energy of so many nations and subnational actors like those from the U.S. to come together and blaze a path forward. To forge this path the nations’ delegates focus on taking one step at a time from where they left off in the last COP in Morocco. One of these steps was the first ever official meeting at COP between nations and non-governmental actors. This was an effort to give more participation to the everyday people that make up civil society. The historic meeting seemed to go well. Unanimously there was an outpouring of appreciation from every country about the input of non-state actors. Unfortunately, the general consensus was that while the non-state actors were incredibly important many countries were afraid that continuing this dialogue would distract from the greater negotiations and take away some of the vital energy for moving the Paris Agreement into implementation. After having seen how many different voices are represented by governments at a negotiation I totally understand how if not done right adding non-state stakeholders may just create a din of voices rather than a conversation that can progress. So despite all my hopes and dreams, it sounds like for now COP 23 may be the first and last negotiation between the nations and non-state actors for now. That being said Dominican Republic, Panama, the Republic of Congo and non-state actors like Citizen’s Climate Lobby are all very much invested in bringing non-state actors to the negotiation table and will not let this failed attempt stop them.

The individual citizen’s voice still has a chance

On another front, however, as countries across the world get experience implementing their greenhouse gas reduction and adaptation commitments (termed Nationally Determined Contribution or NDC) they are realizing that these policies will never be successfully implemented without stakeholder and citizen buy-in.

Climate leaders like Germany, Morocco, Chile and Argentina are already enhancing their NDCs to be even more ambitious and they are across the board doing it by incorporating the voice of the everyday citizen.

Argentina said that the most important part of their ability to enhance their NDC was participation and co-authorship by multi-stakeholder parties. They conducted a series of roundtables with industries and extended them to include NGO’s, academics and everyone else.

Germany said that they gave huge consultations not only with stakeholder but with everyday citizens before revising their NDC. They even took open proposals for how to enhance their NDC from their citizens. Germany explained how important these open proposal from civil society were for allowing people to take ownership of the countries commitments and for challenging business sectors to meet these NDCs.

Morocco engaged stakeholders during their process at multiple stages. First, while they were investigating ways to enhance their NDC and then again after it was drafted to get further feedback. This process resulted in an ambitious goal of reducing greenhouse gas emissions from 32% to 42%.

For me, it is hard to accept that having your voice heard by UNFCCC will probably never be as straightforward or satisfying as getting to talk to a chamber hall full of the world’s leaders about what they should be doing. UNFCCC is a swirling whirlwind of words, documents, and imperfect yet relatable human actors. Scientific theory tells us that a butterfly’s wings can cause a mighty storm across the world. Similarly, with the right groundwork, your voice can also complete the similarly winding and unpredictable journey being heard at the world’s largest stage for climate solutions, the Chamber Hall of the United Nations Framework on Climate Change. So speak up and take action.

Citizens’ Climate Engagement Network organizes focus groups so that the ideas of everyday peoples voices can be relayed to the United Nations Framework on Climate Change.