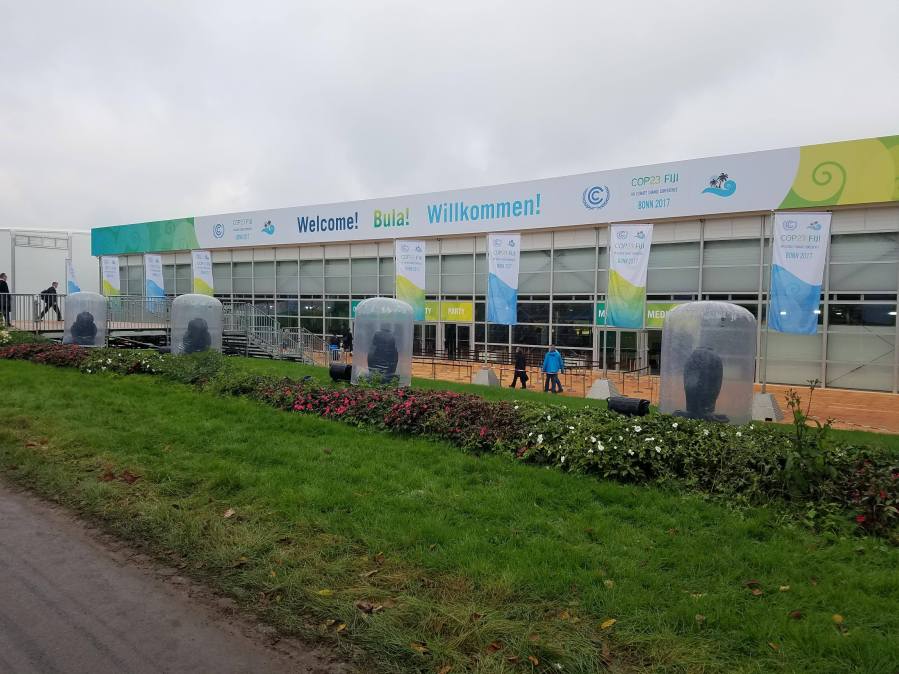 “Welcome! Bula! Willkommen!”- The banner above the entrance to the conference’s Bonn Zone displays proudly. The Bonn zone is located in a park about a kilometer away from the main UN World Conference Center (called the Bula Zone). This is a “tent-city” that hosts country pavilions, exhibition booths, and side events.

The 23rd Conference of Parties (COP23) was held in an effort to create a “rulebook” for implementing the Paris Agreement. If you follow COP23 news reports, you will see how US involvement shaped the discussion of commitments and policy, or what the overall Carbon Budget looks like. Coverage was focused on large-scale actions by governments and what they will and will not commit to. These reports on the negotiation process widely covered events in the Bula zone. Negotiations are important for the overall success of the conference, but they represent only a small percent of interactions that occurred at the conference. Many events occurred in the distant Bonn Zone, where countries displayed their culture and what they were doing to address climate change, and where representatives of non-governmental organizations were able to discuss their individual initiatives and hold side events. All are welcome to share and discuss their different perspectives and tactics in this zone.

My experience at COP23 involved asking the people I met in the Bonn Zone “What are you doing to combat climate change?” Often, responses focused on everyday actions such as cycling to work, taking public transit, or recycling. It was wonderful to hear the passion people had toward being greener in their everyday lives. Occasionally, however, I had the privilege of meeting a person whose personal experiences had led them to combat change in a wider initiative. In general, I found these initiatives used one of five general approaches to combat climate change: Empowerment, Education, Culture, Politics, or Religion

The following are examples of these different kinds of approaches:

All of these people have their own unique contribution to the larger effort of creating a better future for our Earth. From raising awareness through music, to planting trees that empower a community, from efforts at a government level, to efforts of a single village, all are welcome in the Bonn Zone.

“We ourselves feel that what we are doing is just a drop in the ocean. But the ocean would be less because of that missing drop. “

2 thoughts on “5 Approaches to Climate Change Action at COP23”